The Village Medical project for Sierra Leone provides free medical treatment to all village members. Special attention is paid to pregnant women, infants and those under the age of 5. We work in Area 31 of the Kono District approximately 200 miles East of Freetown, the capital of Sierra Leone. 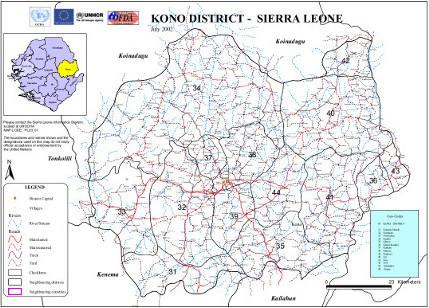 Click on map to enlarge. The VMPSL works in area 31.

Our clinic is set up each morning and broken down at the end of the day. We return to our base camp to eat, restock and discuss the day’s work and how we can improve things for the next day. We make up pre-packed drug bags by body weight with the corresponding drug doses. Each bag initially contains deworming and malaria medication. Additional medication is added as prescribed.

The Clvil war in Sierra Leone began March 23, 1991 and ended January 18, 2002 spanning a period of 10 years, 9 months, 3 weeks and 5 days. Since then the political situation has become relatively stable however the scars of war are still present: in the bullet strewn buildings, in the beggars who had limbs cut off during the violence, and in the stories shared.

The country has remained relatively peaceful but is still struggling to free itself from the economic consequences of years of war. The 2013 UN development index lists Sierra Leone’s economic development 183 out of 187 countries worldwide. Sierra Leone’s healthcare system is in no better shape than it’s economy. According to the figures from the 2013 revision of the United Nations Human Development Index the life expectancy rate is the lowest in the world at 45.6 years. The infant and under 5 years old mortality rates are amongst the highest. 2013 figures for doctor to patient ratio for approximately 6 million people is 1 per 50,000. The majority of doctors operate in the larger cities. Most people in the villages, some with severe medical conditions, had never seen a doctor in their lives before we began. We continually add more people who have never seen a doctor.

Sierra Leone from March 2014 to November 2015 suffered from one of the world's largest outbreak of Ebola virus disease, with fatalities of about 4000 people during the epidemic. The World Health Organization declared the West African region Ebola-free on January 15, 2016, but stressed the need for vigilance.